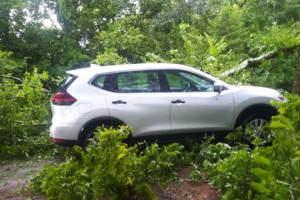 I’ve learned that blessings can come on the mountain tops, but also in the valleys of our lives. For me, summer 2019 would bring one of those valleys, and more than a little pain. But it would also bring renewed hope!

My husband Philip and I had worked out vigorously for months at a local gym, also around our small farm property near Nashville.  We mow eleven of sixteen acres, where countless trees regularly shed wagon loads of branches to toss on our ever-rising burn pile.

I had forgotten I wasn’t twenty years old anymore, and I was beginning to feel the pain of over-doing a thing!

As weeks passed, the pain worsened, and three MRI’s revealed rotator cuff tears in both shoulders, plus pinched nerves in my neck that caused further pain in my arms and hands. “The perfect storm,” it seemed.  Later, in October, cervical (neck) fusion surgery would be necessary to relieve the pinched nerves, and the first weeks of recovery would be excruciating.  The thought of possibly two more surgeries, one shoulder at a time, was unbearable.  I spent the summer hoping none of those surgeries would be needed.

What I needed was a miracle!

Philip and I work together in our small software business a few miles from home, where I enjoy doing promotions and editing Philip’s national blogs. I’m also a writer and blogger, but with painful arms, writing became a challenge.  If only God would just heal me, instantly!  After all, when He walked the earth, He made the blind to see, the deaf to hear, and the lame to walk. Still, I prayed…

“Lord, if it’s your will that I go through all this, please be right here with me.”

August came with an unusual thunderstorm for our area, turning the skies black and threatening, and Philip urged me to hurry home from the office. At once, lightning and thunder began pounding our little town. Windshield wipers were all but useless against the downpour, as I drove through the gate, onto our long gravel driveway.

Suddenly, the driver’s side of my car was engulfed in tree limbs.  Part of that rotting old tree, Philip and I had talked about removing one day, had finally succumbed to the storm. Shaken, I hit the brakes, and then tried to drive forward toward the house, but a large limb had pinned my front wheels in place.  I couldn’t move.

Looking up then, I watched helplessly, as the larger part of that same old tree crashed down right in front of my car.

Heart pounding, I thought to wait a bit for the lightning to let up before getting out of my car. But what if another tree fell?  As it was, with limbs blocking the driver’s door, I’d have to climb over the console and go out the passenger door. Having two bad arms made the whole experience more traumatic, as I grabbed my purse and keys and jumped out into deepening mud puddles. Still about 400 feet to the house, I realized the skimpy sandals I’d worn were no substitute for track shoes I could have used to outrun the storm.  I ran and prayed frantically, past the long row of swaying southern pine trees.

“Lord, HELP ME make it to the house!” After all, I remembered, He had once calmed a terrible storm on the Sea of Galilee.

Finally, safe inside, heart still pounding and soaked to the skin, I was just thankful to be alive.  But truly, if I was hoping for a miracle, I felt sure only the Lord kept me from being crushed under tons of enormous tree limbs, now strewn across the driveway.  I would find out later, the only real damage to my car was that caused by the limb under my wheels, that had kept me from a more tragic outcome.

Surely, God proved He was with me, saving me from that falling tree. And I was reassured He would also be with me through this health crisis; my own “perfect storm!”  Through all of it, my sweet husband has been more than supportive and encouraging.

As I write this…

It’s been nearly seven months since that first (neck) surgery, and five months since the second surgery to repair my right shoulder. Recovery was harder than expected, and I had prayed I would not need a third operation. I’m thankful, that prayer was answered!

In March, however, my husband suffered unexpected “sinking spells” that sent us to the emergency room at Centennial Medical Center in Nashville where doctors operated twice on him to insert a permanent heart pacemaker. Six weeks later, Philip is feeling well and too strong for his own good. Hard to keep a busy entrepreneur down! God is good!!

For all of it, I’m clinging to the promise in Jeremiah 29:11, “I know the plans I have for you, says the Lord; not to harm you, but to give you a future and a hope.”

One thing I understand, God doesn’t promise us a pain-free, tear-free life, but He does promise never to leave us, nor forsake us.  I know there’s a purpose for this season in my life, and I’m thankful for the reminder that came with that summer storm… even a fallen tree.

As Corrie ten Boom would say, “Jesus is victor!”