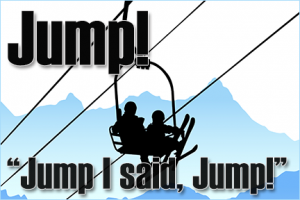 “JUMP!” I heard someone yell.  The urgency in the male voice startled me, as I was still too far from the mountain landing to leave the safety of my lift chair.

It was my first trip to Heavenly Valley Ski Resort in California.  A friend and I had shared a chair on the ski lift that towed us slowly up the face of the mountain.  The view of Lake Tahoe was breathtaking, surrounded by emerald pine forests as far as the eye could see.

Behind us now, the town of South Lake Tahoe looked like a miniature on the rim of the sapphire blue Lake.

Skis dangling from our feet and ski poles at the ready, the thought of the adventure ahead was exhilarating.  At nineteen and full of self-assurance, if little experience, I could hardly wait to take on “the slopes.”

I have to admit to some butterflies in my stomach, knowing the lift would not stop when we reached that first landing.  I would need to ski off the moving chair, not knowing if I would be suddenly thrust onto a downhill trail toward disaster.

As the landing came in sight, others who had successfully skied off their chairs watched as we approached.  Surely, I could do this!

“JUMP!”  The insistent voice called out again.  Still several feet from the landing, I wondered if maybe momentum would just launch me ahead to safety with the others.

“JUMP, I SAID!”  The command startled me, and I was propelled forward off the chair. Big mistake!

Rescue on the Mountain

As if in slow motion, I felt myself slide backward over the face of the mountain.  The chair and my friend went on by, as another chair passed over my head.  In full panic mode now, I grabbed frantically at icy rocks and small pine brushes that dotted the steep decline.

I could hear people gasp above me, and a large man yelled down to me to, “grab the pole,” he held out.  I could barely reach it, but soon found myself being hauled up over the edge, my heart pounding wildly and tears welling up.  Both my friend and my rescuer nervously scolded me for skiing off the lift too soon. They were obviously as shaken as I was.

“Someone kept yelling at me to JUMP,” I tried to explain to onlookers. Their faces showed concern and relief, but also disbelief—apparently not having heard the voice. It struck me, I could have died on that mountain that day.

It would be years before I understood the source of that malicious voice.  But it would not be the last time that enemy of my soul would shake or try to end my life.

And you can bet, that same enemy who “prowls like a roaring lion seeking whom he may devour1” means no less for each of our lives!

Author and Holocaust survivor, Corrie ten Boom, was raised in a family that instilled faith in God and common sense. It had kept her from such precarious situations.  She learned early that life is too precious to risk frivolously, as I had done with my often ill-considered, unskilled and godless escapades.

Yep, Satan is alive and well!

As a young girl, Corrie would have been the one safely enjoying a backyard swing set. While, I was one who had to hang by my heels from the galvanized crossbar above the swings.

Still, each of us in our separate lives was destined to be shadowed by that unfriendly “voice” that meant to do us evil.  For me, captive too young to an abusive marriage; then given to near-misses, still foolishly responding to that prompt to “JUMP” into iffy situations.

For Corrie, after a peaceful family life in Holland, came middle-aged imprisonment in Nazi concentration camps for doing good—hiding Jews from certain death. At that same time, I was still learning to walk, half a world away.

“Satan is alive and well!” I remember hearing that, even as a child, knowing little about the one the Bible calls “the enemy” and “accuser or our souls.”  Coming to trust Jesus Christ as my Lord and Savior in 1984, I finally read the scriptures and realized the truth of that enemy.

Can anyone doubt evil exists?  Think of it….

WARS – Statistics show at least 108 million people died in wars in the twentieth century alone.  Estimates for the total number killed in wars throughout all of human history range from 150 million to 1 billion.  HOMICIDES equal nearly 400,000 each year.  ABORTIONS worldwide estimate 235 million (does not include countries where abortion is illegal, or where not reported).  SUICIDES estimate 703,000 each year worldwide.  On and on!  These statistics do not include genocides, medical/disease-related, and other tragic deaths. Nor, the physical and mental anguish many suffer.

“JUMP!” he says. And, for all the beauty God created here, some will throw caution and virtue to the wind and leap forward into unnecessary trouble and ultimate catastrophe.

One has said, the greatest advantage Satan has, is that most people don’t believe he really exists, or that hell is a real place.  But can we just blame Satan, “The devil made me do it”?

Or is it that many of us, who unwittingly follow that mean-spirited “voice,” don’t believe in a loving God who sacrificed His only Son to save us from our folly, either!

Imagine being in a place where there is NO love, joy, peace, patience, kindness, goodness, faithfulness, gentleness, honesty, mercy; no forgiveness.  That was what Corrie and her family found in those Nazi prisons.  Imagine then, being surrounded by evil and fear… forever. That would be hell!

Corrie ten Boom and her sister Betsie experienced that foretaste of hell in Ravensbruck prison, and yet brought hope and Christ’s love and courage to many who suffered, body and soul, there.  As Corrie wrote, “I was a prisoner, and yet… [in Christ] I was FREE!”

Yes, Satan is alive and well—for now.  The Bible tells us3, “the Son of God was manifested, that He might destroy the works of the devil”… that, BELIEVING HIM, we might also be free.

The IMPORTANT THING is, to hear and BELIEVE the voice of God through His word—His word is truth!  “Satan is a liar and the father of lies,” the Bible says in John 8:44.  We must choose who we will believe; one leads to death, the Other leads to eternal life!

The GOOD NEWS is, the day is coming when the Lord closes the door to this world, and sends Satan packing, permanently to the pit of hell—telling him to go “JUMP!”