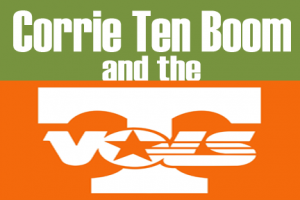 I think Corrie ten Boom might have appreciated American college football, especially the Tennessee Vols!  She loved and worked with youth, and she was well-acquainted with hard work, discipline, coordination and team work, given her early experiences and later profound ministry to others.

Philip can take or leave the pro’s, he says, but he loves seeing young people at these schools. Loves all the color, energy and excitement that goes with them sharing the best years of their youth together.

The Tennessee Vols football team had lost to the Florida Gators for the past eleven years, and Philip and I looked forward to cheering “our team” on to victory in this latest matchup. In our (also) eleven years of marriage, Philip has taught me a lot about football and the strategy of the game. I’ve learned to really enjoy football. So, popcorn popped, pizza in mind, we snuggled on the couch to enjoy the match.

Sad to say, watching the first half of the September 24th game was less than inspiring, with Tennessee dropping the ball six times, and fans in the bleachers looking as if the Rapture had happened, and they had missed it. At the half, the score was Florida 21, Vols 0.

It made me think how… as we run our personal “race” in life… it often happens that, when things seem to be going “south” (no pun intended), we give up as if its game-over, before we wait to see the final score.

Philip was disappointed, “How do you drop six balls that even I could have caught?”

“Well, the one thing we haven’t done is prayed!” I said, not trying to sound pious. He smiled, “It’s a football game!!”

“You have not, because you ask not, somebody said somewhere… in ALL things!” Hmmm! I prayed!

So what happened? If the Tennessee Vols team had left the field at the half looking down in the mouth, they bounded out of the locker room with new resolve. In fact, you might have thought it was a whole new team… like maybe Alabama had donned the Vols uniforms and hit the field!?

But, no… play after determined play, the Vols fought the good fight to claim a 38 to 28 victory over their long-undefeated Florida foe. Odd thing was, Florida… the team that could do no wrong in the first half, seemed to be unable to move the ball in the second half.

Philip smiled again about my prayer, “Really?” But, he had that high-five look all over his face.

For me, watching the explosion of cheers and tears on the faces of 100,000 Tennessee fans, then seeing them, arms linked, swaying to the strains of “The Tennessee Waltz” was a touching moment in time for those of us who hoped for Tennessee’s victory. I thought, “Would that so many would gather together to cheer the One who laid down His life to allow us the greatest victory of all… eternal victory!”

Corrie ten Boom’s true life story is a lesson in victorious living! Life well lived… love of family and others… faith in the One she had learned was trustworthy always… ups and downs, but never taking her eyes off the goal… deep personal assurance, even in the face of the fiercest enemy in world history. As I said earlier, I think Corrie might have liked American college football!

Our hope is, as the next generations live out their lives… dreaming their dreams, even if their world might seem at the point of “game-over”… that they will not let negative input, “political correctness,” or anything else rob them of Truth, and the most important goal possible for their lives: eternal victory in Jesus Christ. “For with God nothing will be impossible” (Luke 1:37).