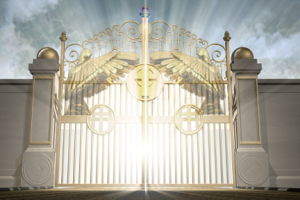 Jesus was gone now, and it struck me deeply that He had not said what I’d hoped to hear—“Well done, good and faithful servant.”  I had made it safely inside the gates, but the hands that were reaching toward me would be eternally left outside.

Near the end of the Musical, Corrie is about to be led away by a Nazi prison guard, when another prisoner, who has mocked Corrie’s faith for months, suddenly runs to her. Desperately, she asks Corrie how she can know God, before the Nazis take her life.